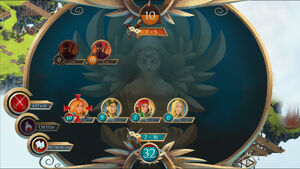 Combat in Highlands is always a clash of steel and blood. Ultimately, it is the only way to free the Highland.

Direct combat is full frontal assault triggered by meeting one of two conditions:

Once combat is triggered, players are taken to the combat screen with the allied characters on the bottom of the screen and the enemy troops on top of the screen. Player are given the option to Use an item or Fight. The Withdraw option only becomes available on the second combat turn. The player can also choose which character will block all the next incoming damage. When selected, the Use an Item button will do exactly that and only one item can be used per round of combat. When selected, the fight button will trigger the damage phase, where both sides will deal damage simultaneously. These repeat until everyone on one side is eliminated.